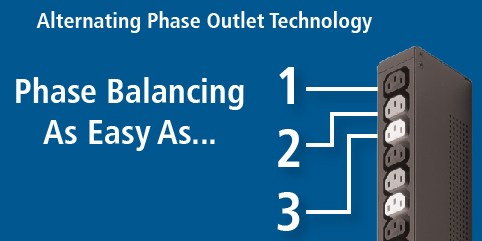 Up until now, you were able to power your servers and applications using a 30A single phase, 208V power distribution unit (PDU) that contained two 20A circuit breakers. This power cord feeding this PDU contained two power wires and a ground wire. In order to properly distribute 30A of power without overloading any branch, you needed two 20A branches with an equal quantity of outlets per branch.

But now, you are investing in denser applications that require more power. To achieve this power density, you are considering upgrading your cabinet power feeds to 3 phase distribution and 60A service. Doing so will increase your power availability from 5kW to 17.2 kW, but it will also require tripling the number of branches in your PDU from two to six.

When utilizing a three-phase six branch PDU, balancing your loads evenly across the six branches is very important so as not to overload a single branch. In addition, as outlined in a recent Server Technology white paper, equally loading all three phases in the data center will result in the highest power usage efficiency, minimizing heat in your cable runs, as well decreasing the likelihood of tripping an upstream circuit breaker.

Traditional PDU’s have branches bunched together in groups along the length of the device, requiring a multitude of different cable lengths from the PDU to the equipment to achieve balanced loads.  This scenario typically results in a large amount of cable in the back of the cabinet which subsequently inhibits airflow increasing heat, and shortening equipment life.

You can overcome these challenges by using an alternating phase PDU from Server Technology. In alternating phase PDU’s, the six branches are distributed on an outlet by outlet basis instead of grouped together in six discreet zones.  This results in shorter power cords between the rack equipment and PDU, resulting in a cleaner cable structure and maximum air flow.  Assembly also becomes faster and easier, as the installer typically just needs to connect the equipment to the nearest outlet, and the branches inherently balance.