The History of HDOT: Early Development 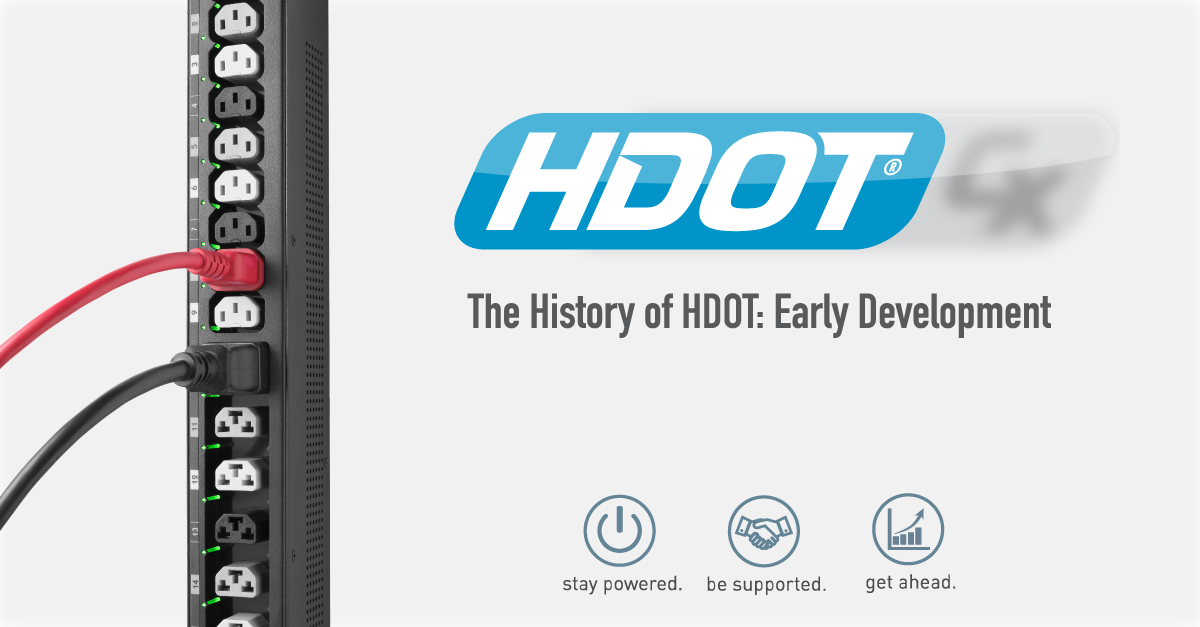 While we have almost certainly established our position in the PDU industry, Server Technology remains committed to its mission statement. As mentioned in the previous post, we continued to listen and learn from our customers as they continued to face the challenges presented by the ever-changing data center market. The new HDOT Cx is an example of that commitment, but its development is best understood in light of the evolution of the HDOT product family.

When HDOT first came out, it only had the capabilities of a Smart unit but was gradually improved over its product history.  With each improvement came success, until it eventually became the most popular and innovative data center PDU on the market.

Now, it is available in Switched, POPS and with Alternating Phase Outlets, all for the purpose of solving the top data center challenges of power density, capacity planning, and remote power management.

Here is a description of the evolution of each of these features for the HDOT platform:

Switched HDOT: allowed users control of the unit on a per-outlet or per-device basis for configuration and control from a remote location.  This improvement introduced IP network access to the unit and allowed secure communications information to be easily transmitted to IT professionals over any web browser.  It measured voltage, power, crest factor, apparent power, power factor, reactance, accumulated power, and current along each inlet or infeed of a cabinet power distribution unit (PDU).

POPS:  allows data center operators to measure voltage, current, apparent power, active power, crest favor, and power factor at the outlet level.  Plus, warnings and alarms can be set up to monitor current, power, and power factor for both low and high values. This helped to reduce power faults, resulting in a safer and more effective data center.

Even in the early stages of HDOT, Server Technology was open to allow customers to drive the development and evolution of their PDUs. This made for an industry-leading combination of responsiveness, innovation, and customer support. For us, the stage was already set for more progress along the PDU continuum.

Due in part to increased demand, and in part to an increasing number of available new features, Server Technology’s customers were faced with an array of customizable power strips that could be built to their specifications. The complexity of this process led to the development of a configuration tool that gave the end-user the ability to specify, or build, their own customized PDU. This configuration tool was dubbed ‘Build Your Own PDU,’ and then shortened to BYOPDU.

Both HDOT and Alternating Phase are available through Server Technology's "Build Your Own PDU" configurator. Build Your Own PDU takes a Switched, Smart, or Metered 42-outlet High Density Outlet Technology (HDOT) PDU and allows you to build an HDOT PDU your way in four simple steps. Users were able to select everything from their voltage, amperage, and phase requirements to power input, orientation, outlets, connectivity, and quantity preferences. This program can also be used to build HDOT Switched, Smart, and POPS PDUs.

The BYOPDU has proven to be a real game-changer for customers. It allows them to quickly and easily generate a specification for a custom configuration and then request a quote for the exact unit. For them, there was much less hassle and much more predictability. Specifying exactly what they needed allowing them to save time and money in the end, getting just what they needed the first time.

The History of HDOT: Value & Mission