The Role of Efficient and Intelligent Power in the Smart City 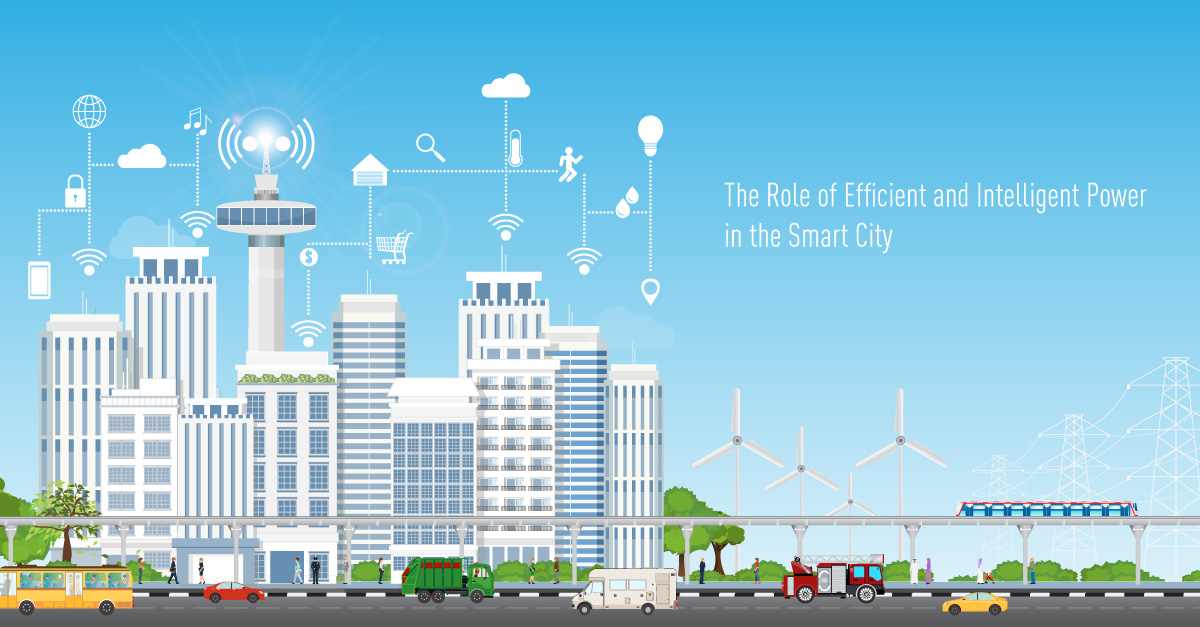 In our previous post on the smart city, and as explained in Marc Cram’s latest whitepaper, ‘Smart Cities Run on Smart Power,’ we identify the contributing factors in the development of smart city technology.  It is the advent of the microprocessors and microchips that collect the massive quantity of intelligence that enables the city.  In this blog we will shift our attention to another contributor: energy efficiency measures in the field, at the data center, and within racks that are supported by data center environmental monitoring and intelligent PDU(s).

As city leaders push aggressively for improving the energy efficiency of everything that is plugged into the city’s electrical grid, it has created cascading levels of efficiency.   is everywhere you look: streetlamps are migrating from mercury vapor to LED, and appliances are mandated to be Energy Star rated.   Offices are required to turn off their lights when not occupied, and thermostats are set to higher temperatures to reduce the energy demands arising from the city’s air conditioning systems.

The adoption of renewable energy sources is mandated to lessen the need for the oil and coal consumption that enable the transportation systems and electronic devices of mobile citizens. Meanwhile, the adoption of electric cars, electric bikes, and other electronic gadgets is placing additional demand on the existing power generation facilities at a rate greater than efficiency programs can offset.  This requires additional power sources to be brought .

Somewhat paradoxically, the increase in energy efficient systems has led to the consumption of more oil and coal.  The net increase in the number of electrical systems, microgrids, and connected devices has led to an overall the amount of electricity that we consume as a nation.  The population growth of large city centers is another contributor to increased consumption.  As noted in ‘Smart Cities Run on Smart Power,’ as of 2014, midtown Manhattan uses more power daily than did the entire country of   The data centers that collect and process all of this data are themselves a part of the problem and not the solution, consuming somewhere near 5% of the country’s electricity production.

In order to provide , data center environmental monitoring systems, working in close concert with intelligent PDUs, have provided an avenue to reduce consumption at the source and provide support for the smart city.  City planners and managers continue to seek new ways to the change consumption patterns and behaviors of the companies and people occupying the city to make the city more sustainable and more socially equitable.  But reducing energy consumption is only part of the picture for smart cities. Incorporating more renewable energy generation capacity along with a variety of energy storage options is also a key focus of city planners and administrations trying to support the growing energy demand being driven by population growth and the move away from oil dependency for vehicles.

The challenges of the smart city encompass increasing efficiency, complying with renewable mandates, reducing overall energy consumption, storing and generating power, all while meeting increasing demand.   ServerTech is at the forefront of this challenge, ready with PDU solutions to monitor and report energy use.  For more on what it takes to make a smart city run, see the new ‘Smart Cities Run on Smart Power’ whitepaper by Marc Cram.

Servertech and You: Technical Support