-48VDC Power and the Backbone of the Telecommunications Industry 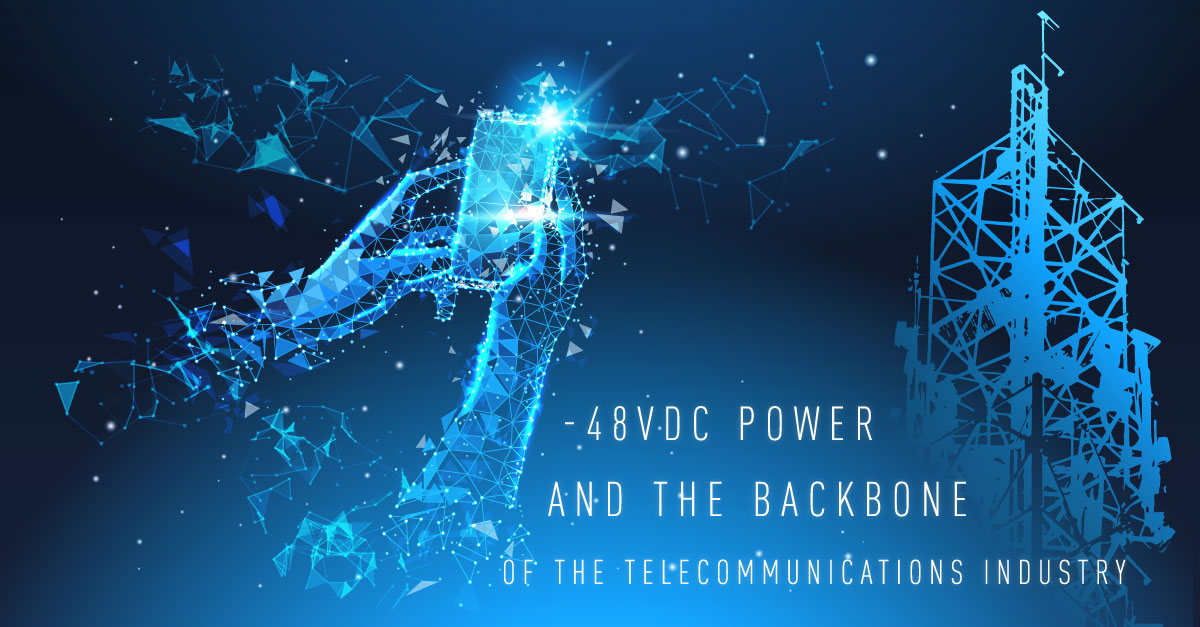 The original telephone systems of the Bell Telephone company were powered from a -48VDC infrastructure out of their central office locations.  In the late 1800’s, most homes of were not yet wired for electricity; in fact, communications beat power to the home in much of the United States.  The reason Bell selected -48VDC is because it provides enough in power to support a signal, but not enough to be dangerous. Today it is generally accepted by safety regulations and electrical code that anything operating at or below 50V DC is a safe low-voltage circuit, and -48VDC is still the standard in communications facilities serving up both wired and wireless services.

In fact, -48VDC allows telecom operators to use 12-volt lead-acid batteries wired in series to act as a backup power source in the event of a power failure. Negative 48VDC (-48V), or positive grounded, was selected for use by Bell when it was found to be superior to positive voltage.  It prevents electrochemical reactions from destroying buried copper cables and rendering them useless if they happen to get wet. Negative voltage also protects against sulfation on battery terminals. Generally regarded to be more energy efficient, it bypasses the single and dual power conversion processes found in most AC UPS units.

The central office (CO) and wireless switches are run by a combination of AC powered rectifiers and batteries. The batteries are rated at 48 volts DC and the rectifiers supply 52 volts DC. The rectifiers keep the batteries charged and power the CO equipment while the electric company power flows. If the power fails, the batteries, which are "floating,” seamlessly take over the load. The communications equipment doesn't notice the difference, and everything keeps operating. When the power comes back, the rectifiers take over again and continue operating.  In some ways, the entire facility is a large uninterruptible power supply.

Telecommunications equipment draws a lot of current and all of the wires and conductors are very large.  Other applications for -48V DC include powering cell towers, local cable TV vaults, and legacy central offices of the various incumbent local exchange carriers (ILECS).  Many of these ILECS have been bought back by AT&T.  The gear deployed in these instances is typically supplied by Alcatel-Lucent, Juniper, Nokia, Ericsson, Cisco, and Huawei.   All of them offer the option of relying on -48V DC power supplies to keep the voice and data traffic moving across the networks.

Most of the data passing through this hardware is considered to be mission critical in nature, and there is little room for failure. The last stop for power before going into the power supplies of the mission critical hardware is a DC power distribution block or some form of power distribution unit (PDU).  It provides the outlets or terminals necessary for powering the network hardware. This PDU is the best place to monitor power consumption and provide remote power control.

As an industry, we have seen an amazing progression in technologies since the first landlines started reaching their way across the country in the late 1800’s.  More than a century later, we are preparing for the next evolution in wireless technology: 5G.  And what will those new, lightning fast, bandwidth-intensive networks going to be looking to for mission critical power?

The Benefits of a Server Tech -48VDC PDU