All About the New 3-Phase Power Video 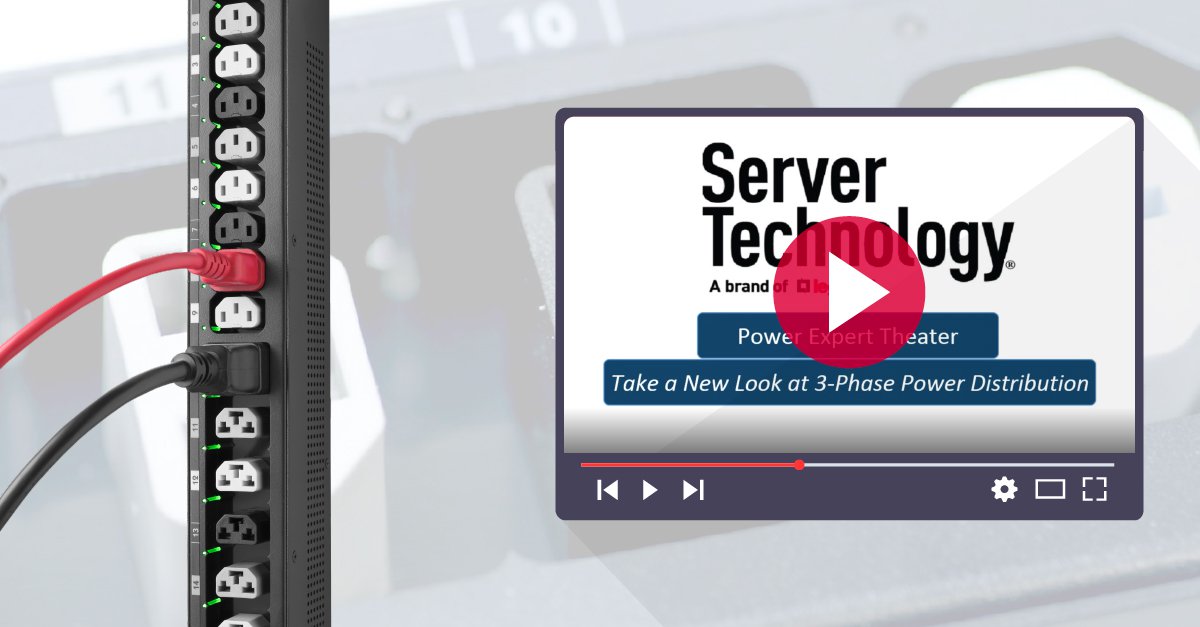 In Server Technology’s new video, “Take a New Look at 3-Phase Power Distribution,” the newly organized Server Tech Theater tackles the subject of 3-phase PDU power distribution to the rack and, more specifically, where and when you should and should not reach for an alternating phase rack mount PDU.

So first, when you should not.  While there are many situations that are ideal for alternating phase (that ingenious approach to alternating the three phases outlet by outlet, rather than grouping all of them together), there are some that simply are not a good fit for this kind of PDU.  As everyone knows, PDUs that support 3-phase power don’t come cheap.  Server Tech suggests that if an equipment rack is fully populated at initial deployment, and all of the equipment has equal power requirements, a conventional PDU is probably right for you.

That said, there are two scenarios that would be advantageous to use an alternating phase PDU.

First, when the initial deployment is not a fully populated rack:  often, racks are loaded with equipment over time, and space is left for future growth.  It is not uncommon to have a rack with the bottom third populated with servers, the top of the rack populated with switches, and the middle of the rack is completely empty.  If you used a conventional PDU, the initial installation would require 2-3 different lengths of power cables stretched across the back of the rack to achieve a balanced load.  This is the perfect time to reach for an alternating phase PDU instead.

There is another scenario where an alternating phase PDU is an advantage over a conventional PDU.  Say you have high-density equipment grouped in one part of the rack, like a set of blade servers mounted at the bottom of the rack.  Let’s also say this equipment requires six C19 outlets on the PDU.   As you know, high-power C19/C20 cords are heavy gauge, have a poor bend radius, and are expensive. The extra cost of those longer cords can really add up fast across hundreds of racks.  This would be another good situation to install an alternating phase PDU instead of a conventional PDU.  All three phases of the C19 outlets are available in different areas on the PDU, which allows the high-density equipment to be connected with shorter cords

There are several problems with running power cables up and down the rack, requiring multiple cable lengths, not the least of which is that it can disrupt the airflow coming from the back of the IT equipment.  As equipment is added over time, the cabling becomes more disorganized and chaotic, leading to reduced airflow and higher power usage effectiveness, or PUE.

Just remember that Server Technology’s alternating phase PDU provides simple cable management, shorter cable runs, better airflow, less heat, simple load balancing, and better power efficiency all around.  Does it get better than that?  We’re glad you asked, because it actually does.  To see how your best-case scenarios just got even better, spend a few minutes watching the “Take a New Look at 3-Phase Power Distribution.”  We guarantee the ending will surprise you.